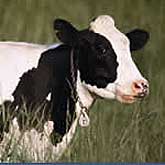 In 1986, the first case of 'mad cow' disease or bovine spongiform encephalopathy (BSE) was found in cattle in Great Britain. Irritable personalities, fearful behavior, and a staggering gait preceded death in affected cows. Autopsies showed holes in their brain tissue. Food scientists thought the cows got BSE from their feed. The feed contained meat and bone meal from sheep that had died from a disease called scrapie. Scrapie and BSE are both prion diseases. Prions (pronounced PREE ons, for proteinaceous infectious particles) are proteins. In sheep, the prion in normal brain cells has a spiral backbone. The scrapie type forms a flat sheet.

A human disease similar to BSE is Creutzfeldt-Jakob Disease (CJD). CJD begins with numbness and unexplained mood swings. Next come hallucinations, staggering, and pain. Before death in one or two years, people with CJD lose sight, memory, personality, and physical control. There is no treatment or cure. Before the 1990s, CJD was extremely rare. Worldwide, it occurred only once in every one million people, nearly always between the ages of 50 and 75. The incidence of CJD among humans in Britain nearly doubled between 1990 and 1994. By 1996, laboratory investigations had revealed a tragedy. A new strain of CJD called variant CJD (vCJD) had turned up in British people. Variant CJD arises much earlier in life than the previously known CJD. Misshapen prions in beef cause it. BSE spread among animals because brains and spinal cords of dead cows were fed to other cattle. Transmission to humans occurred through brain and organ meats and 'mechanically recovered beef' scraped from the spines of cattle.

Prion diseases take a long time to produce symptoms. Years pass while normal prions change shape. Still more years go by before the misshapen prions accumulate in numbers large enough to cause brain damage. Exactly how the damage occurs is unknown. In cell cultures, the shape change happens inside nerve cells, where misshapen prions accumulate in pockets called lysosomes. The bursting of lysosomes could kill brain cells. The natural clean-up of dead cells by the body could leave the spongy spaces in the brain characteristic of the prion diseases. By the year 2000, nearly 200,000 British cattle were known to be infected with BSE. More than four million cows had been slaughtered, and 81 people had died from vCJD. The British beef industry lay in ruins.