Making Cars Out of Soup 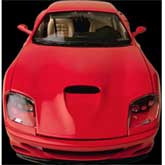 There was an old TV show set on a spaceship some time in the future which included a machine about the size of a microwave oven. Whenever people wanted something like a meal or a component to repair the space ship, they would go to this machine, press a few buttons, and the machine would make it for them. Today these machines exist, they cannot make meals yet, but they are used a lot for making prototype parts. For example, car designers can create a three dimensional design on a computer and use one of these machines to 'print' the real thing!

The technology is called three-dimensional lithography and this is how it works: There are a range of plastic resins which are 'thermo-setting'. This means when they reach a certain temperature they solidify. A three dimensional lithography machine uses a tub of these resins and the heat of a laser beam to create a solid. Inside the tub there is a moveable platform. It starts at the surface of the tube and can be moved down into the fluid in very small steps. The machine's laser can be focused at any point on the surface of the fluid in the tub.

The computer design of an object is converted into a set of very thin slices. Each point has an (X,Y) coordinate and the computer works out which points are to be solid and which are not. The thickness of each slice is the same as each step the platform takes as it is slowly moved into the fluid. At the beginning, the platform is level with the surface of the fluid and the laser is guided to fire a short burst to heat up and solidify every (X,Y) point on the first slice of the object. The platform then moves down the thickness of one slice (this is the 'Z' direction) and the laser then solidifies all the points on the next layer. This process goes on until the object is complete and it can be taken out of the tub, ready to go.