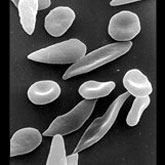 Sickle cell anemia is a genetic disorder in which the red blood cells collapse into a 'sickle' shape and cannot carry oxygen very well. They also tend to get stuck in narrow blood vessels, causing painful crises. The disease is caused by a change in one amino acid making up the large hemoglobin molecule that gives blood its red color and its oxygen carrying capacity. People who carry two copies of the defective gene (homozygotes) have only abnormal hemoglobin. This is a life-threatening disorder, and patients often die young.

People who have only one defective copy of the gene (heterozygotes) have enough normal hemoglobin to lead normal lives, and interestingly, they are somewhat resistant to malaria. The parasite that causes malaria lives part of its life cycle in red blood cells. It cannot live as well in blood cells that contain some abnormal hemoglobin.

Thus in places like Africa, where malaria is common, the gene for sickle cell anemia is much more common than it is among people in northern Europe. Even though having two copies makes people very sick, having one copy gives them an advantage if malaria is a threat. In the United States, sickle cell anemia is much more common among African-Americans than among Americans of European or Asian descent.