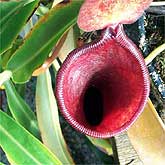 What's for dinner? A bowl of salad greens, corn on the cob and strawberry shortcake for dessert. And it's not just us, most animals and insects love to munch, crunch and dine on plants. But there is a small group of plants that has turned the dinner table and eats us, well, not exactly people, but small mammals, frogs, lizards, and insects. I'm of course talking about carnivorous plants. From the well-known Venus Flytrap to the exotic Cobra plant, these are truly weird plants.

Carnivorous plants occupy a very small ecological niche. Most of them live in areas where the soil is lacking the basic minerals that plants need to grow and propagate. Most plants make food for themselves through the process of photosynthesis. They absorb water and nutrients through their root systems, take in carbon dioxide, and use sunlight to create carbohydrates and sugars that are used for food. Certain nutrients are key to a plant's success in making food. If these are lacking from the soil, it is hard for plants to grow and reproduce. Habitats such as marshes and swamps are too wet to fix minerals in the soil. Even some drier soils are mineral deficient. Carnivorous plants didn't have to look far to find what was missing from their diets - animals are in ready supply. There was only one problem, how do you catch an animal when you move in slow motion?

Carnivorous plants developed several ingenious ways to do this. First, create some bait to lure the animal. Most do this by secreting sweet, sugary liquids, or wafting alluring smells into the air. Second spring a trap. A Venus Flytrap does just that. Tiny hairs act as triggers. An unsuspecting insect comes in contact with these hairs and the leaves snap closed. Other plants create a deep pitcher filled with water to drown the prey. An insect falls in, but can't get up the slippery, sticky sides. Now that the prey is caught, the plant uses secretions to digest the victim. What they can't absorb through their roots, they absorb through their leaves. Think of that next time you bite into a celery stalk.