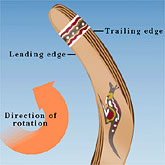 As the boomerang flies through the air, each wing produces lift. Due to the shape of the boomerang a pressure differential exists between the lower and upper surface (on each wing) which creates aerodynamic lift. A boomerang is thrown with a spin which has two effects on the boomerang as it travels through the air: a stabilizing force known as gyroscopic stability and the development of a curved flight path. The turning force imposed on the boomerang comes from the unequal air speed of the spinning wings. For a stationary, spinning boomerang, both wings would produce the same amount of lift. Now applying the same spinning boomerang with a forward velocity and the speed of the air traveling over the wings differs. Thus, the forward moving wing experiences more lift than the retreating wing. The net result is a force which turns the boomerang.