Life In The Extreme 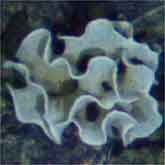 Lowly microbes just may be the toughest living things on Earth. They have learned to survive, and indeed flourish, in the harshest environment imaginable, deep-sea rifts. These rifts are chains of undersea active volcanoes that stretch across the ocean floor. Super-hot roiling lava from deep within the Earth's core, plumes of sulfuric particles, and seawater mix to create hydrothermal vents. This torrid environment is made all the more extreme by the total darkness and the incredible pressure (over 300 atmospheres) and temperature (over 600 degrees F/300 degrees Celsius) exerted by thousands of feet (meters) of seawater.

Yet within these vents microbes thrive. In fact, as soon as a vent opens up, even if it is hundreds of miles (kilometers) away from its nearest neighbor, it's soon teaming with microbes. One key to their survival may be that they are chemosynthetic.

In general, the life process begins with plants and their ability to use the energy of the sun to make food, what we call photosynthesis. Some animals live off the plants, while other animals eat the plant eaters. But no sunlight reaches the deep-sea rifts. The microbes instead create energy by working with the chemicals that flow out of the vents. This process of chemosynthesis allows them to make food and survive. As to how they can withstand the pressure and the intense heat of the water, scientists have a way to go to figure that out.