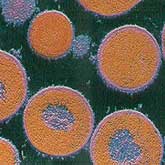 There are creatures that were living on the Space Station before the first astronauts went inside. Astronauts found a few living on the Moon. Scientists believe they could even live on Mars. These creatures are capable of living almost anywhere--and they're living inside you right now!

It's not something out of a science fiction movie. It's bacteria and other microbes, such as viruses and fungi. The tiny microorganisms hitchhiked on the International Space Station (ISS) components when they were launched, as well as on other spacecraft. Microbes go everywhere that humans do; in fact, many of them live inside and on our bodies. Most microbes are harmless, and many are actually beneficial. However, some microbes can be harmful to people's health, or could even pose a threat to the hardware and materials of the Space Station.

Bacteria have proved to be very resilient in living in harsh conditions in spaceflight. When Apollo 12 astronauts landed on the Moon in 1970, they found something living there--bacteria from Earth. The Streptococcus mitis bacteria were found on the Surveyor 3 probe that had been sent to the Moon 3 years earlier. While unprotected exposure to space would kill a human being very quickly, the bacteria had survived launch, space vacuum, 3 years of radiation exposure, deep-freeze at an average temperature of only 20 degrees Kelvin above absolute zero, and having no nutrients, water, or energy source. Researchers at the University of Arkansas have found that bacteria commonly found in cows' stomachs can survive in an environment like the one found on Mars.