The Dogma of Life 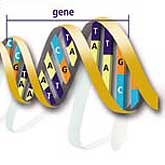 Dogmas are authoritative tenets common in religion and philosophy. But in molecular biology? Molecular biology has a central dogma, proposed by Francis Crick in 1953, that says that genetic information flows from DNA to RNA to proteins.

The journey from raw genetic information to life begins inside the cell's nucleus. There, instructions for life are coded in the language of DNA, or deoxyribonucleic acid. DNA language is written with just four 'letters' (bases): A (for adenine), T (thymine), C (cytosine), and G (guanine). The 'D' in DNA comes from one of DNA's components, the sugar deoxyribose. The sugar in RNA, or ribonucleic acid, is ribose, which has one more oxygen atom than deoxyribose. RNA uses the same letters as DNA, but instead of T it uses a U (for uracyl). Whereas DNA is double stranded (it is composed of two backbones bonded by pairs of letters, A pairs with T and C pairs with G), RNA is single stranded.

RNA polymerases synthesize one type of RNA, messenger RNA (mRNA), which is a copy of the DNA sequence in the nucleus. Then, mRNA carries the genetic information from the nucleus to the protein-making machine of the cell, the ribosome. The ribosome reads the sequence of letters in the mRNA - every 3 bases code for an amino acid - to form proteins. Proteins are long chains of amino acids that make up muscles and hair, sense light, and regulate vital functions in the human body. One could say then that life is what it is, thanks to a dogma.