When Motherhood Means More than One 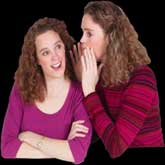 These days, twins, triplets, and other multiple births are becoming more common, but how do they happen? Fraternal twins (or triplets, quadruplets, or more) develop when two or more eggs are fertilized by two or more sperm. This can happen when the ovaries release more than a single mature egg. These are essentially separate pregnancies, although they develop side-by-side in the mother's uterus. Twins formed this way are no more closely related than any other brothers and sisters. They just happen to share the same birthday. (A more complicated case is when the egg copies itself and divides before fertilization. Then two identical eggs are fertilized by two different sperm.)

Identical twins, triplets, or other multiples form from a single fertilized egg. Sometime during the zygote's early cell divisions, the ball of cells splits once, twice, or more. The separated balls of cells continue to develop normally. Identicals are those twins that are so hard to tell apart. They look so much alike because they are genetically identical. Identicals are always the same sex. Fraternals may be the same or different sexes.

Naturally-occurring twin births run around four in 1,000 births. Natural triplets happen in one of every 7,000 to 10,000. Quadruplets occur naturally once in every 600,000. The natural rates are coming to mean less as more couples are having children later in life and using medical technology to achieve pregnancy. Both of those factors increase the likelihood of a multiple birth. In 2001, 30 in every thousand births in the U.S. were twins. Nineteen in every 10,000 were triplets or more.