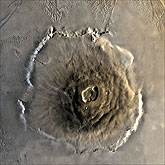 Olympus Mons, the largest volcano in the solar system, towers a breathtaking 25 km above the surrounding plains on Mars. Until recently scientists thought that Olympus Mons and other volcanoes on the Red Planet had been extinct for hundreds of millions, perhaps even billions, of years. Now it appears they might have been wrong. New images from NASA's Mars Global Surveyor spacecraft show that volcanoes were probably active less than 100 million years ago, and indeed may still be active today.

One way that planetary scientists estimate the age of features or events on a planet's surface is by counting the craters left behind by meteorite and asteroid impacts. On a planet like Earth with weather or geological activity, craters tend to be quickly erased. On planets where nothing much happens, such as the Moon, the craters remain. The pock-marked surface of the Moon is considered 'old' by planetary physicists whereas Earth's surface is dynamic and 'young.' By counting craters on surfaces with known ages, like lunar highlands and maria which have been dated by radioactive methods, it is possible to obtain a rough conversion factor between the minimum age of a planetary feature and the number of craters that are found on top of it.

In an article in Nature, a team led by William Hartmann (Planetary Science Institute) examined high resolution images of craters around a volcanic caldera called Arsia Mons. Previous pictures of the region did not show the detail necessary to identify the smallest craters, but the newer images made an analysis possible. What they found surprised them. Within the caldera, the researchers counted just one meteor crater per 100 square kilometers. A similar-sized area on the Moon contains more than 60. They concluded that older craters must have been covered over by lava as recently as 40 to 100 million years ago. By geological standards, that's very recent. In fact, based on the statistical distribution of crater sizes in the Global Surveyor images, the authors suggest that volcanism is continuing on Mars in current geological time.