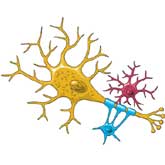 Until recently, most neuroscientists thought we were born with all the neurons we were ever going to have. As children we might produce some new neurons to help build the pathways - called neural circuits - that act as information highways between different areas of the brain. But scientists believed that once a neural circuit was in place, adding any new neurons would disrupt the flow of information and disable the brain's communication system. In 1962, scientist Joseph Altman challenged this belief when he saw evidence of neurogenesis (the birth of neurons) in a region of the adult rat brain called the hippocampus. He later reported that newborn neurons migrated from their birthplace in the hippocampus to other parts of the brain. In 1979, another scientist, Michael Kaplan, confirmed Altman's findings in the rat brain, and in 1983 he found neural precursor cells in the forebrain of an adult monkey.

These discoveries about neurogenesis in the adult brain were surprising to other researchers who didn't think they could be true in humans. But in the early 1980s, a scientist trying to understand how birds learn to sing suggested that neuroscientists look again at neurogenesis in the adult brain and begin to see how it might make sense. In a series of experiments, Fernando Nottebohm and his research team showed that the numbers of neurons in the forebrains of male canaries dramatically increased during the mating season. This was the same time in which the birds had to learn new songs to attract females.

Why did these bird brains add neurons at such a critical time in learning? Nottebohm believed it was because fresh neurons helped store new song patterns within the neural circuits of the forebrain, the area of the brain that controls complex behaviors. These new neurons made learning possible. If birds made new neurons to help them remember and learn, Nottebohm thought the brains of mammals might too. For some neuroscientists, neurogenesis in the adult brain is still an unproven theory. But others think the evidence offers intriguing possibilities about the role of adult-generated neurons in learning and memory.