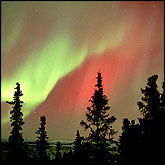 You might wonder what the Northern Lights and neon signs have in common. Actually, a lot! What makes luminous colors shimmer across the Northern sky? The answer is in the Sun. Charged particles are constantly ejected from the Sun. These particles, collectively called solar winds, travel toward Earth with an average speed of 400 kilometers per second. Earth is shielded from the solar winds by its atmosphere and magnetic field. The magnetic field pulls the charged particles toward the North and South poles. As the particles strike atoms in the upper atmosphere, electrons are knocked free. We call atoms whose electrons have been knocked free 'ionized'. When the electrons re-unite with the ionized gas, they emit light.

In a neon tube, light is produced by a similar mechanism. The tube contains a low-pressure gas that is under high voltage. The high voltage ionizes the gas, and when the electrons recombine, they emit light. The color of the light depends upon the type of gas that is ionized: Oxygen emits bluish light, and neon emits reddish light. Because the chemical makeup of the Earth's atmosphere changes with altitude, the color of the aurora depends on altitude. The most spectacular auroras occur at elevations of 75 to 150 kilometers, and can produce red, green, yellow, blue and violet light. The shimmering is due to motion of the ionized gas as it is pulled by the Earth's magnetic field. And what is our planetary sign saying? Come and see and learn!