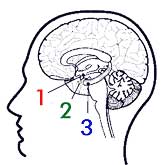 Sex, food, and smell are linked in our brain by ancient pathways governing appetite, odor detection, and hormones. In fact, another name for the brain's limbic system (a primitive brain-within-the-brain responsible for emotional urges, hormone levels, and unconscious bodily functions such as blood pressure and appetite) is rhinencephalon, or 'nose-brain.'

Why nose-brain? Because the limbic system is believed to have developed out of an even more primitive odor-processing brain system that operated when our distant ancestors were swimming through the primordial ooze many millions of years ago. No matter how sophisticated we humans think we've become, smells still have the power to trigger our emotions, make us hungry, or even make us like or dislike another person.

There are people who have lost their sense of smell due to illness or injury, a condition called anosmia. Often, anosmics retain little of their former interest in food, and experience little enjoyment of it when they do eat. About a quarter of anosmics lose not only their appetite for food, but their appetite for sex as well.