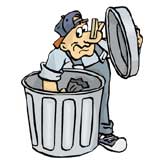 Our language seems to indicate that we think of the world as divided up into things that 'smell' and things that don't. Garbage smells. Groceries don't. A dirty sock smells. A clean one doesn't. That way of talking doesn't give much respect to odors, or to our olfactory system. Once you appreciate the delicacy of our olfactory system's design, you're likely to give it a little more of the respect it deserves.

At the top of your nasal passages, just behind the bridge of your nose and where the passages are closest to your brain, there are five million smell receptor cells concentrated in two small patches no bigger than a dime, one for each nostril. There are about a thousand different types of receptor, each one of which allows a different odor molecule to 'dock' in it. That in turn triggers that receptor's neuron to fire and send a signal to the olfactory bulb, which relays the signal to several destinations in the brain.

Think of each receptor type as a different letter of an alphabet, and think of how many different words there are in your vocabulary. Now, think of an alphabet not of 26 letters but of a thousand. That gives you some idea of the potential complexity of the odor codes that can be sent to your brain. Impressive, isn't it!