Obesity: How much fat can your genes handle? 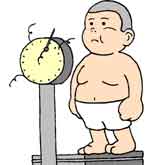 According to some experts, the popular formula for weight loss, 'eat less, and exercise more,' is not working for many Americans. Recent estimates say that about 34% of adults and 22% of preschool children in the U.S. are overweight. These numbers represent a threat to public health because obesity increases a person's risk of developing diabetes and cardiovascular disease. Our daily life is low in activity and our foods are high in calories. This imbalance could be fixed with small changes; for example, reducing 100 calories per day by walking 15 minutes (or 2,000 steps) everyday.

However, for some people, walking won't do the job. There is a biological factor, something in our bodies, that regulates weight. 'Even the most conservative studies show that genetic factors have 60% of influence in obesity,' says Jeffrey Friedman, one of the discoverers of leptin, a hormone that helps the body regulate the amount of fat. Leptin is produced by fat tissue and signals the brain when to stop eating. A mutation in the genes that code for leptin would prevent signaling and the person would continue to eat, thus gaining weight.

The role of genes in obesity has been shown through twin studies (both tend to be fat), adoption studies (adopted kids with the same access to calories as the non-adopted kids have different weight), and heritability (just as height, obesity is passed from parents to children). 'Obesity is not a personal failing,' Friedman wrote in a paper in Science (February 7, 2003). 'In trying to lose weight, the obese are fighting a difficult battle, a battle against biology, a battle that only the intrepid take on and one in which only a few prevail.'