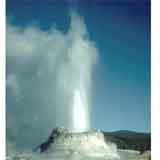 Hot springs are what you get when you mix ground water with underground volcanic activity. They may be very acidic, containing sulphurous compounds or just mineral laden. Hot springs were the original spas used by early humankind. A hot spring is caused when ground water seeps deep into the aquifer and comes near or touches a volcanic heat source. A geyser takes something more - a reservoir of water that is affected by the geological structure above the aquifer.

Geysers are much less common than hot springs. In fact, some estimates put the number of geysers in the entire world at fewer than 500. They are truly rare. Yellowstone National Park in the United States has more than its fair share of geysers, the most famous being Old Faithful. What makes Old Faithful so unique is that it erupts consistently, spewing super hot steam and water hundreds of feet into the air. Even more amazing, it does this roughly every 65 minutes, day in and day out, year in and year out, hence its name.

The age of the water that is emitted from geysers has been measured to be hundreds of years old, meaning it takes a long, long time for that water to get down into the aquifer and work itself back up to the surface. The mechanism that moves the water back up is not completely understood. However, heated water is less dense than cool water. Add underground pressure to the mix and you may be in for a gusher. Thar she blows!