The Night Orville Wright Had Too Many Cups Of Coffee 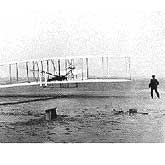 Whenever Wilbur and Orville Wright's colleague, George Spratt, visited their Kitty Hawk glider test camp, lively discussions and arguments on flight persisted until late in the evening. On this particular night, October 2, 1902, Orville had one too many cups of coffee and could not sleep.

Although their 1902 glider's new fixed vertical tail had successfully corrected the machine's turning difficulties (at times the machine would turn in the wrong direction), now there was a new difficulty. Sometimes the glider would slide rapidly toward the ground in the direction of the lower wing. The wing tip would strike the ground and spin the machine around making a hole in the sand. The Wrights called this 'well-digging.' Today this airborne motion is called a tail-spin. Although 'well-digging' did not happen very often, it convinced the Wrights their flying machine's control system was incomplete. Well-digging had not occurred with their previous gliders, none of which had tails.

Orville, unable to sleep, worked out a technical explanation for well-digging and a method of overcoming it - the design of a new vertical tail - a real rudder. At breakfast the next day, he would discuss the design with his brothers, Wilbur and Lorin, and Spratt. This new rudder would perfect the Wrights' ability to control their glider. The brothers would later file a patent for this system. Today all modern winged aircraft use these same basic mechanisms for control. This was a major discovery in the history of aviation, due in part to too many cups of coffee.