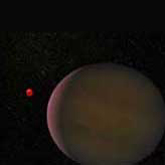 If only astronomers had a giant magnifying glass in space, they might be able to uncover planets around other stars. Now they do -- sort of. Instead of magnifying a planet, astronomers used the magnifying effects of one star on a more distant star to reveal a planet around the closer star. The discovery marks the first use of a celestial phenomenon known as microlensing to locate a planet outside our solar system. A star or planet can act as a cosmic lens to magnify and brighten a more distant star lined up behind it. That's because the gravitational field of the foreground star bends and focuses light, like a glass lens bending and focusing starlight in a telescope. Albert Einstein predicted this effect in his theory of general relativity and confirmed it with our Sun.

The newly discovered star-planet system is 17,000 light years away, in the constellation Sagittarius. The planet, orbiting a red dwarf parent star, is most likely one-and-a-half times bigger than Jupiter. The planet and star are three times farther apart than Earth and the Sun.Together, they magnify a farther, background star some 24,000 light years away, near the Milky Way center. In most prior microlensing observations, scientists saw a typical brightening pattern, or light curve, indicating that a star's gravitational pull was affecting light from an object behind it. The latest observations revealed extra spikes of brightness, indicating the existence of two massive objects.