Your Own Personal Rainbow? 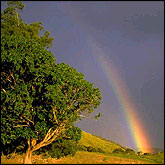 Did you know that no two people ever see the very same rainbow? It's true. Rainbows are formed when light enters a water droplet, reflects once inside the droplet, and is reflected back to our eyes dispersed into the visible spectrum; red, orange, yellow, green, blue, indigo and violet. The rainbow you are seeing is actually from water droplets positioned like a cone exactly 42 degrees from the line of light, with your eyes positioned at the tip of the cone. In other words, if the sun is near setting on the horizon and a rainbow occurs, you can look 42 degrees upward with the sun at your back, and the rainbow will be located in that position.

Considering that only the raindrops positioned at the surface of a cone with you at its tip can form the rainbow you are seeing, then two people standing side-by-side are observing rainbows formed by different sets of raindrops: each person has his or her own personal rainbow! And don't try to photograph your own personal rainbow in its entirety; it's too big to fit in the picture! It doesn't matter if the rainbow is formed from a garden hose or rain because a normal 35mm camera lens only has a field of view of 40 degrees. A rainbow's angular span is bigger than that. You'll have to buy a special lens.