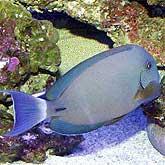 As any diver can tell you, the waters under the sea can be beautiful and dangerous. The oceans are full of venemous fish, sharks, stinging jellies, manta rays and an assortment of spiny urchins and anenomeas. But who would imagine that one of the most attractive and colorful group of fish on the coral reef has its own surgical tool built right into its tail? Surgeonfish, also called Tangs, can be found throughout the tropical and sub-tropical oceans of the world. Aptly named, the surgeonfish are distinguished by one or two razor sharp protrusions or spines on each side of their tails. These spines, which usually lie flat, are not for show. When disturbed, a Surgeonfish will raise its razor sharp spines, sharp enough to cause serious injuries to divers and snorklers who get in the way. The fish use their weapons defensively though, as they are strictly vegetarians.

Besides being beautiful, and well equipped with spines, they also serve an important function in the health of the coral reef ecosystem. This time it’s not their tails, but their diet. These vegetarians’ main food is algae. Algae needs an abundance of two things to thrive. One is oxygen; the other is sunlight, which makes the shallow coral reefs of the tropics a perfect place for algae to proliferate. Left undisturbed, algae would soonblanket the coral in a carpet of green, preventing the tiny coral from breathing and taking in nutrients. Left unremedied, the coral would soon die. To the rescue comes algae-eaters like the Surgeonfish. The mouth of a Surgeonfish is perfectly designed to carefully removing the algae from coral while leaving the coral intact. Their fine row of sharp, small teeth make short work of the algae.

Surgeonfish come in an amazing assortment of colors, usually with a similar flat, oval body shape that’s easy to recognize. There are over 70 species of this fish and they are very common in the shallow coral reefs. One particular group of Surgeonfish have a strange knob growing out of their foreheads, making them look like the mythical unicorn. As you probably can guess, these are called Unicorn Fish. Whether you call them Unicorns, Surgeonfish or Tangs though, remember that a quick swipe of their tail and you might need a real surgeon to sew you back up. These are surely a ‘look but don’t touch’ fish.