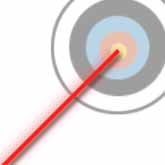 A bullet fired from a gun becomes subject to the pull of gravity and begins to fall the instant it leaves the gun barrel. The farther away from the gun the bullet travels, the lower to the ground it gets. To compensate for this, guns are sighted in such a way that the bullet is actually going upwards when it leaves the barrel. The bullet then follows a 'ballistic' trajectory. The bullet rises up to a maximum height, then falls until it hits either its target or the ground. Sight adjustments are made so that the bullet follows its flight path and strikes its target point at a specific distance from the end of the gun. The cross-hairs in a traditional telescopic sight serve as a reference point for the shooter: they are to be adjusted so that when the shooter looks through the sight she or he sees the desired point of impact exactly where the cross-hairs cross. This type of sighting system requires the shooter to place his or her full attention at the weapon rather than at the target.

'Laser sights' function in much the same way. But instead of a pair of crossed hair (which are actually spider webbing) inside a telescope, they use a beam of laser light from a well-constructed laser device. The position of the laser beam relative to the barrel of the gun is adjusted so that highly-visible red dot of the laser coincides with the desired point of impact of the bullet at a specific distance. With this type of system, the shooter's attention is fully on the target itself rather than a point six inches in front of the eye. He or she then has only to look for the red dot, position it on the target accordingly, and pull the trigger.

In more complex, advanced weapons systems, the laser serves the same purpose, but usually in a more technological way. Using electronic detection systems that 'recover' the laser signal, data is fed back into critical direction/distance control systems that allow a ground-based weapon system to shoot at and reliably strike a desired target several kilometers away. In other systems, a laser beam sighted onto a target by a 'spotter' is detected by an incoming missile that then uses that signal to guide its flight path directly to the target. The missile itself may have been fired a hundred kilometers or more away, but will strike within 10 centimeters of its intended target.