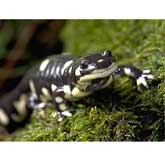 So who is the greatest regeneration superhero of all? Among vertebrates the lowly salamander is the champion 'comeback kid.' We humans are pitiful by comparison. We can often regrow the tip of a finger if only half an inch or so is cut off (the last joint must remain). The salamander will regrow a complete leg if it is cut off! The process of regeneration begins with the formation of a clump of dividing cells at the wound site. This group of cells is called a blastema, and is different from a scar. These cells proliferate and then develop into the new limb, in a process very similar to the way the limb developed in the embryo. First the thigh, then the lower leg, and last the feet and toes (or fingers) grow. The regrowth takes several weeks to complete, but eventually the new limb will be just as good as the one that was lost.

The salamander is the only vertebrate that is any good at regeneration, although many invertebrates can also do it. Cockroaches can grow new legs. Starfish can grow new arms. A lowly flatworm called a planarian can be cut into over a hundred little pieces, and each will regenerate nearly an entire new body.

Naturally we wish people were better at regeneration, and scientists are working to learn more about how salamanders do it. A mutant mouse has been discovered that can regenerate its heart. This and other studies are showing that forming a blastema instead of a scar is a critical first step in regeneration.