Resistance is NOT Futile! 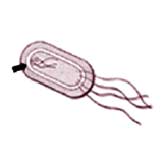 Maybe if you are a Star Trek heroine up against the Borg, 'resistance is futile.' But if you are a germ that makes people sick, resistance - to antibiotics - is not futile at all.

When penicillin began to be widely used over fifty years ago, it could kill most of the bacteria that made us sick. Such bacteria are called 'pathogens,' to distinguish them from the many bacteria that are harmless or even useful. Nowadays, many pathogens are 'resistant' to a lot of the antibiotics we use to combat them. They have evolved the ability to fight off the effects of the drugs, so the drugs cannot cure you. This can be very dangerous in hospitals, where drug-resistant pathogens can spread rapidly and kill many people.

How can bacteria evolve drug resistance so quickly? The genes for drug resistance are usually not carried as part of the regular chromosome, but on extra rings of DNA called plasmids. These can be passed on to the bacterial cell's descendants, and can also sometimes be passed around to any other bacteria that happen to be in the area, even those of other species. If a drug kills all the susceptible bacteria, any few that are resistant will be free to multiply without competition and take over the population. So we are involved in an 'arms race' between biologists and chemists inventing new antibiotics, and pathogens inventing new ways to resist them.