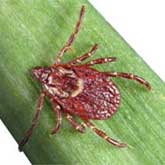 Rocky Mountain spotted fever (RMSF) is caused by tiny bacteria called rickettsiae that live inside the cells of infected individuals. It has been reported throughout the United States, but is most prevalent in the South Atlantic and South-Central states. In 1999, 579 cases were reported to the CDC.

The bacterial species responsible for RMSF, Rickettsia ricketsii , is passed to humans through the bite of a tick. Once in the bloodstream, the microbes enter the endothelial cells that line the blood vessels, and there they reproduce. As the bacteria divide, they spread throughout the circulatory system and invade more endothelial cells. Sites of infection can swell, and red blood cells can leak out of the vessels into surrounding tissues. RMSF symptoms include fever, headache, rash, and muscle aches. The characteristic rash is an important indicator of infection. The disease can usually be cured with antibiotics, especially when given early. No vaccine is available.

Several studies seek detailed information on how R. rickettsii invades cells and causes disease. All microbes have evolved unique ways to bypass the body's assorted physical barriers and defenses, and by understanding these processes researchers hope to learn ways to stop the bacteria in their tracks.