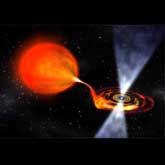 Gravitational radiation, ripples in the fabric of space predicted by Albert Einstein, may serve as a cosmic traffic enforcer, protecting reckless pulsars from spinning too fast and blowing apart, according to a report published in the July 3 issue of Nature. Containing the mass of our Sun compressed into a sphere about 10 miles across, pulsars are the core remains of exploded stars. Pulsars are born spinning, but can gain speed by pulling in gas from a neighboring star, reaching spin rates of nearly one revolution per millisecond, or almost 20 percent the speed of light. Scientists have long wondered how these 'millisecond' pulsars keep from accelerating their spin rate and blowing apart. Thanks to observations using the Rossi Explorer, they now speculate that the cause is gravitational radiation.

'Nature has set a speed limit for pulsar spins,' said Prof. Deepto Chakrabarty of the Massachusetts Institute of Technology in Cambridge, lead author on the journal article. 'Just like cars speeding on a highway, the fastest-spinning pulsars could technically go twice as fast, but something stops them before they break apart. It may be gravitational radiation that prevents pulsars from destroying themselves.' The faster a pulsar spins, its spherical shape changes, developing distortions in its crust and allowing it to radiate gravitational waves. Eventually, the pulsar's spin rate balances out when the momentum lost in gravitational radiation is matched by momentum gained when gas is pulled in from the nearby star.

A short burst of X-ray light, emitted by a massive thermonuclear explosion on some pulsars' surface, serves as a direct measure of spin rate. Scientists have studied these 'burst oscillations' from 11 pulsars and have found none spinning faster than 619 times per second. From a statistical analysis of those pulsars, they concluded that pulsars must stay below 760 revolutions per second in order to stay intact. Gravitational radiation has not been directly detected just yet, but the Laser Interferometer Gravitational-Wave Observatory (LIGO) in Hanford, Wash., and in Livingston, La., are expected to make the detection and study of the relationship between pulsars and gravitational radiation much easier.