How Does Salmonella Get Inside Chicken Eggs? 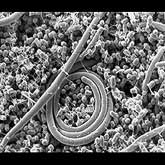 Salmonella enteritidis is a bacterium that causes flu-like symptoms in humans. It usually enters the human body through undercooked food that we eat, such as chicken eggs. Symptoms develop 12-24 hours after the infected food has been eaten and last anywhere from 4 to 7 days. The bacterium actually lives inside infected chicken eggs and how it got there was once a mystery.

Salmonella enteritidis lives in the feces of many animals, including chickens. Because chickens sit on their eggs, even before they are collected for consumer purchases, the eggs may be subjected to the bacterium. It was found that S. enteritidis could actually penetrate the hard outer shell of the egg and live inside the yolk, where it can reproduce. After further research, it was also established that the bacterium could infect hens' ovaries, and contaminate the egg before it even developed a shell. Also, egg collectors clothing could pick up S. enteritidis from chicken feces, contaminating other chicken houses. So what are the egg producers doing to prevent human illness from the bacterium?

The egg industry has tried to eliminate S. enteritidis from its chicken houses by practicing new sanitation procedures. Also, they are testing hens for the ovarian bacterium and eliminating chicken houses infested with S. enteritidis. To ensure that you never become ill due to this bacterium, make sure to cook eggs fully before you eat them. Not all eggs contain Salmonella enteritidis, but who would want to take the chance?