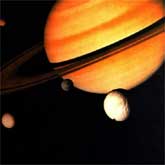 To ancient astronomers, Saturn was a wandering light near the edge of the known universe. The planet and its rings have been objects of beauty and wonder ever since Galileo noticed the 'cup handles' that seemed attached to a round world. Saturn is a smaller version of Jupiter, made up of a similar mix of gases, mostly the very light hydrogen and helium. Like Jupiter, all we see of Saturn is the tops of its clouds. With their subdued hues of yellow, gray and brown, they lack the sharp, brightly colored belts of Jupiter. Above the clouds there seems to be a high haze of frozen ammonia crystals. Saturn's rings, its best known feature since Galileo's time, stretch far out around the planet, extending to more than half the distance from the Earth to the Moon. They actually consist of a series of individual rings separated by small gaps and composed of huge numbers of small particles.

Saturn has at least 15 moons, some only recently discovered by passing spacecraft. Among those that have long been known is Titan, one of the largest moons in the solar system, massive enough to retain a thick, cold atmosphere that obscures any view of its surface. Organic compounds are present on Titan, and it has occasionally been speculated that life may exist there.

Saturn is far out. A billion miles from Earth, the planet was not reached by any spacecraft until September, 1979, when Pioneer Saturn, after a six-year trip by way of Jupiter, flew past the rings to within 21,000 kilometers (13,000 miles) of Saturn's cloud tops. Voyager 1, with better, more sophisticated instruments (which had explored Jupiter in 1979) reached Saturn slightly more than a year after Pioneer. On November 12, 1980, Voyager 1 ducked under the rings, passed Saturn at 124,000 kilometers (77,000 miles) above the cloud tops, crossed the ring plane again, and headed out of the solar system at 90,000 kilometers per hour (56,000 miles per hour). In a few hectic days, the television cameras and other instruments of Voyager 1 told us more about Saturn, its rings, and its moons than was learned in all the centuries that people have studied this strange and beautiful world.