When A Bass Isn't A Bass 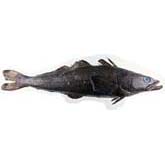 Chilean Sea Bass, a very popular though overfished deep-sea fish, is not a bass at all. It is actually a Patagonian Toothfish (Dissostichus eleginoides), or sometimes its cousin, the Antarctic Toothfish. It lives in the cold southern waters off of the continent of Antarctica. It doesn't have much competition there. Of the almost 20,000 species identified in the world's oceans, only about 100 inhabit these waters. They live in a unique microhabitat called the Antarctic Convergence, where the cold waters that flow around Antarctica meet the warmer waters of the seas to the North. The extremely cold water temperature creates a biological barrier to less hearty sea life, yet the toothfish thrives in these waters.

The toothfish is relatively slow growing and requires ten years or more to reach sexual maturity. It is also long lived, with a lifespan exceeding 45 years. That's not hard to fathom. When a species carves out a niche, relatively free from predators and rich in food, there is no hurry to have offspring, and no reason to explode the population.

The toothfish is primarily a bottom feeder. It can grow up to 6 feet (1.8 m) in length, and can weigh up to 200 pounds (74.6 kg). This is a big fish. So why do we call it a bass? Well, if you went to a fancy restaurant, would you order a Patagonian Toothfish in a beurre blanc sauce?