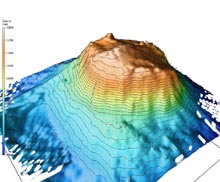 Seamounts are undersea mountains that rise from the ocean floor, often with heights of 3,000 m or more. Compared to the surrounding ocean waters, seamounts have high biological productivity, and provide habitats for a variety of plant, animal, and microbial species. Seamounts are formed by volcanic processes, either as isolated peaks or as chains that may be thousands of miles long. In the Atlantic Ocean, the New England Seamounts form a chain of more than 30 peaks that begins near the coast of New England and extends 1,600 km to the southeast. Some of the peaks are more than 4,000 m above the deep-sea floor, similar to the heights of major peaks in the Alps. Bear Seamount is the closest of the New England Seamounts to the coast of the United States, and rises from a depth of 2,000 - 3,000 m to a summit that is 1,100 m below the sea surface.

Previous investigations have found numerous invertebrates, including cephalopods, crustaceans, and more than a hundred other species in 10 different phyla. These investigations also found more than 100 species of fishes, some of which are commercially important. Several species discovered at Bear Seamount were previously unknown to science. One of the challenges for animals living in the deep sea is a general scarcity of food. Most primary production in the ocean takes place in the upper 100 meters of the water column. Consequently, primary consumers (zooplankton) and higher predators are much more abundant in this near surface region than in deeper waters. Most deep-water fishes are not considered commercially important because their flesh lacks protein and has a watery consistency that makes them unattractive as food for humans. In the 1980’s, however, fishermen discovered large populations of a very different type of deep water fish living between depths of 700 - 1,200 m.

These fishes had firm, tasty flesh and high content of protein and lipids. Moreover, these fishes occurred in large aggregations around seamounts and plateaus near Australia and New Zealand. The biomass of fishes in these aggregations was typically more than ten times the biomass of other deep-water fishes in surrounding areas, making the aggregated fish much easier to harvest than fishes spread out over large areas of the deep sea. One of these fishes, the orange roughy, is now common in North American markets. How are large populations of muscular, active fish like the orange roughy able to obtain enough food from the deep-sea environment to meet their energy requirements?