See You Later Crocodile, In A While Alligator 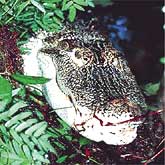 Name a reptile that is really big, has lots of teeth and has been around for millions and millions of years. If you guessed an alligator, you'd be right. If you guessed a crocodile, you'd also be right. Now do you know the difference between the two? Alligators and crocodiles are cousins on the reptile family tree, both in the classification called crocodilians. A quick look would reveal two very similar-looking creatures. But look a little bit closer.

Alligators are found in the subtropics and since they can take a wider range of temperatures, they also are known to hibernate when it get colder. Alligators are smaller than crocodiles, with males growing up to 15 feet. The quickest way to tell an alligator from a croc is to look at the animal's snout. The alligator has a much more rounded snout, and few of its teeth remain visible when its mouth is closed. Alligators, while not exactly calm creatures, are a lot calmer than crocodiles. They also inhabit fresh water. Gators have sense receptors around their mouths that help them detect differences in water pressure. This aids them in finding prey in murky water. Alligators are found in China as well as the Southeastern United States, and they are plentiful.

Crocodiles hail from the tropics, where it is hot and humid. They can grow up to 20 feet in length and show a marked aggressive streak. They have a pointed snout with most of their teeth exposed when their mouth is closed. Crocs can live in salt water or brackish water. If they take in too much salt, they expel it from a special organ in their mouths. Crocodiles, like alligators have sense receptors to help them find prey. But with crocs, they are located not just in the mouth region, but all over their bodies. Again habitat plays a role. Crocodiles are apt to live in water that is murkier than their fresh-water cousins. So you may not see them, but they very well may sense you. Crocodiles' range is much wider than alligators. They are found on the African continent, Asia, Australia and the Americas. But there are fewer than 2,000 wild crocs in the United States.