Seeing In The Dark 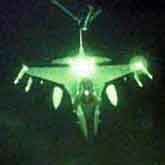 In the movies, there are all sorts of nasty things that can see perfectly well in the dark. More realistic movies also boast their share of 'beasts' that can see in the dark. Who could forget the eerie sight of FBI trainee Clarice Starling being stalked in the pitch-dark basement of the psychotic killer's torture house? The insecurity and near panic she felt were clearly visible in her face as we looked at her through the killer's eyes, even though her image was little better than that of a pale, green ghost. How could he (and we) see her so well? The answer is in electrons, and in light. Not the usual light that we can see, but light of a slightly lower energy and longer wavelength than the visible range: near-infrared (IR) light. Most materials emit or reflect near-IR light. That is the fact that allows night vision goggles to work, and their value in helping us to see in the dark has been demonstrated time and again.

The principle of 'night vision devices', or NVDs, is simplicity itself: gather the near-IR light as though it were visible light, then do something with it to turn it into a visible signal. That is the tricky part; how do you translate something that is invisible to our eyes into something that our eyes can see? NVDs come in two varieties: passive devices and active devices. Passive devices merely amplify the existing near-IR light. They are often referred to as 'starlight' devices, because starlight has been the usual source of the near-IR light that they process. Active NVDs, on the other hand, incorporate a near-IR light source with which to illuminate the target. In both cases, the photoelectric effect is used to capture and amplify the collected near-IR light. Photons are gathered into an objective lens that focuses them onto a highly polished metal plate, much the same way a camera focuses incoming visible light onto photographic film.

The photoelectric effect then causes electrons to be emitted from the metal plate.These electrons are then accelerated through a potential of several hundred volts to pass into a 'channel plate'. The channel plate contains an array of thousands and thousands of tiny pores (channels), and each channel acts as a 'photomultiplier' tube. The result is that the more IR radiation that goes into the NVD, the brighter the image obtained. Since IR radiation goes hand-in-hand with temperature, adjusting for the wavelength of the IR light allows NVDs to display true thermal images. The user then sees things according to the heat that they give off rather than the light that they reflect. And this - if you are a search-and-rescue worker trying to find a child lost in thick cover, or if you are a soldier walking picket on a starless night in the desert, or if you are just a small boy trying to spot a T-rex from the dubious safety of a stalled electric car - could be a very good thing.