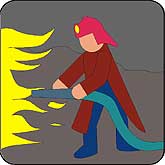 The dictionary defines altruism as 'an unselfish concern for the welfare of others.' That's the kind of behavior that rescue workers showed in the 9-11 attack on the World Trade Center, and many of those rescuers sacrificed their lives so that the lives of others could be saved. Every culture has altruists. But altruistic behavior has long posed an interesting challenge to evolutionary theorists. How could an 'altruism gene' be passed through the generations if it led to behavior that benefited others at one's own expense? Wouldn't your chances of survival, and of the perpetuation of your genes, be greater if you simply placed priority on your own welfare?

One theory is that altruism can be advantageous as long as you direct it towards the right people, those who share many of your own genes. Your parents, children, and siblings share half your genes on average; your grandchildren and grandparents, one quarter; your cousins, one eighth. Evolution, then, might act according to a relatively simple cost-benefit analysis: as long as the cost to you of your altruistic behavior is less than, say, one half its benefit to your sister, it is advantageous in the sense of resulting in a net gain in the chances of ensuring the perpetuation of your genes. In fact, if the beneficiary also has the gene for altruism, all that matters for the perpetuation of that gene is that its benefit to that person is greater than its cost to you. As far as this kind of algorithm is concerned, it makes no difference whether or not you die in the process. From a genes-eye view, the body that houses it is just a temporary means for replicating itself.

So if people with an altruism gene were selective about behaving altruistically, that right there would enhance the survival value of the gene. You can quickly see another advantage of this selective strategy: if you just help out people who are also cooperative and unselfish, they're more likely to help you out at another time. That results in 'reciprocal altruism' an ethic of 'I'll help you if you help me,' which could hardly be called unselfish. Even altruism, it seems, has to be at least a little self-serving in order to survive.