Sex and the Sea Slug 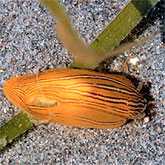 The sea slug, Aplysia. Now there's an expert on sex. Equipped with both male and female sex organs, this shell-less, subtidal mollusk lives alone most of the year. It loses its self-sufficiency, however, when the mating season comes around. In summer, sea slugs congregate in breeding colonies called (yes, it's true!) brothels. They crawl around and over one another, trading sperm.

The marvel of sea slug sex lies in how these virtually blind loners find each other for a few days annually. Their call to the brothel is neither sight nor sound, but a chemical compound called attractin. Released into water from egg-laying glands, attractin makes sea slugs irresistible to other sea slugs. Attractin is a pheromone. Pheromones are communication chemicals. They are released by one individual. They affect the behavior or body functions of another.

All animals produce a 'cocktail of chemicals' that influence attraction, mating, or both. Humans are no exception. In 1986, researchers in Philadelphia collected sweat from men's underarms and dabbed it on the upper lips of women. The women reported smelling nothing but the alcohol that had been used to extract the 'eau de sweat.' After three months of this dabbing, however, those women who had experienced formerly irregular menstrual cycles became as predictable as the tides. The investigators concluded that some chemical released from the male body could control the timing of the female menstrual cycle.