Is It Sexism or Racism? 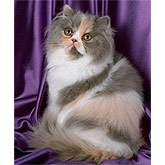 Sometimes, an egg cell will have two X chromosomes instead of one, or a sperm cell will have one X and one Y chromosome when it should only have one or the other. The cat will end up with the combination XXY, an extra chromosome! This also happens in humans and is called 'Klinefelter's Syndrome'. In cats, one X chromosome can have the black fur gene, and the other the orange fur gene. The result is a calico male cat that is usually sterile. The next time you see a calico or an orange tabby, you probably can judge whether it's a boy or a girl, and it isn't sexism or racism, it's genetics! Make a bet with someone!