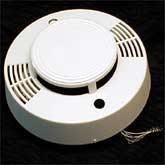 How does a smoke detector 'know' when there is a fire? Smoke detectors use one of two different methods to do their job, and for both methods the basic operating assumption is the cliche 'where there's smoke there's fire'. Smoke is of course, essential to the operation of a smoke detector, and it is the physical interaction of smoke particles with either light or nuclear radiation that is the basis of a detector operation.

The principle by which an optical smoke detector works can be readily seen by shining a small laser pointer into a foggy sky. Rays of light can only be seen when they shine directly into one's eyes; they can not be seen from the side. The laser however, is clearly visible in the fog. As the light strikes the small suspended droplets of fog some are reflected away at angles to the original path, and these are what makes the beams of light visible from the side. In an optical smoke detector, light travels down a path from an emitter to a detector. This light must pass a tube positioned at right angles to the path that the light must follow. When smoke enters the light path, some of the light bounces off the suspended smoke particles and passes down this tube. It is detected there by a photocell, whose current triggers the alarm sound of the smoke detector.Optical smoke detectors are good, but they can be fairly easily fooled by other air-borne materials, leading to false alarms.

Ionizing smoke detectors use a very small amount of the radioactive element Americium-241 as a source of ionizing radiation. As the atoms of Am-241 break down they emit positively-charged alpha particles. These energetic, charged particles interact with nitrogen and oxygen molecules in the air to produce corresponding ions. The heart of an ionizing smoke detector is a set of electrically charged plates constructed in such a way that this constant flow of ions produces a measurable current. When even a small amount of smoke enters an ionizing smoke detector, the smoke particles interfere with the ionization process, causing an interruption in the flow of ions to the detector plates and a loss of current to the circuit. This loss of current allows another circuit to become active, and when this happens the alarm is sounded.Ionizing smoke detectors are more common than optical smoke detectors. They are not only considerably cheaper to build, but are more sensitive to smoke itself.