Spiders and Their Venom 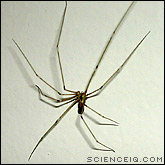 Spiders, which have been around for about 300 million years, are built differently from insects. They have eight legs, not six, and their bodies are divided into two sections, not three. Entomologists put spiders in the class Arachnida along with mites, ticks, and scorpions, and only about 34,000 of an estimated 120,000 species have been described. Fewer than that have been studied.

All spiders are venomous in the sense that all but one species possess a pair of poison glands. Since spiders use their jaws to employ their venom, they bite, jabbing their fangs into their prey while squeezing venom out from these glands. Chemically, spider venom is a mixture of many different toxins and digestive enzymes. Researchers today are investigating venom as a medicine. Necrotic venom, which is found in spiders like the brown recluse and which causes tissue decay, might be helpful in dispersing blood clots that cause heart attacks, according to one study. Spider-venom-derived medicines in homeopathy affect the nervous system, heart, and brain, with each species having its own particular accent.