What Are Squares And Square Roots? 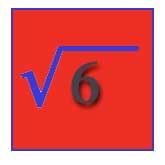 The mathematical term 'square' comes from the two-dimensional shape of the same name. A square shape has the two dimensions of length and width, both exactly the same and at angles of 90 to each other. It is also perfectly flat. Put another way, a square is just as wide as it is long. The mathematical square of a number comes from the shape of a square by the number of standard-sized squares that it contains. For example, a square that measures 9 centimeters on a side contains 81 smaller squares that are each 1 centimeter on a side. This is easy to demonstrate by making a drawing of the square on a piece of graph paper that has been ruled into 1 centimeter squares. Draw a 9 centimeter square and count the smaller squares that it contains. There will be 81 of them.

That number was obtained by finding the area of the four-sided shape, multiplying the length of the figure by its width. That is, by multiplying one number by another number. For a square, the length and width are equal. Finding the area of a square therefore involves multiplying a number by itself. This brings us to the general definition of the square of a number. The square of any number is that number multiplied by itself.