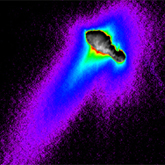 Throughout history, people have been both awed and alarmed by comets, stars with 'long hair' that appeared in the sky unannounced and unpredictably. We now know that comets are dirty-ice leftovers from the formation of our solar system around 4.6 billion years ago. They are among the least-changed objects in our solar system and, as such, may yield important clues about the formation of our solar system. We can predict the orbits of many of them, but not all. Around a dozen 'new' comets are discovered each year.

Each comet has only a tiny solid part, called a nucleus, often no bigger than a few kilometers across. The nucleus contains icy chunks and frozen gases with bits of embedded rock and dust. At its center, the nucleus may have a small, rocky core. As a comet nears the Sun, it begins to warm up. The comet gets bright enough to see from Earth while its atmosphere - the coma - grows larger. The Sun's heat causes ice on the comet's surface to change to gases, which fluoresce like a neon sign. 'Vents' on the Sun-warmed side may release fountains of dust and gas for tens of thousands of kilometers. The escaping material forms a coma that may be hundreds of thousands of kilometers in diameter.

The pressure of sunlight and the flow of electrically charged particles, called the solar wind, blow the coma materials away from the Sun, forming the comet's long, bright tails, which are often seen separately as straight tails of electrically charged ions and an arching tail of dust. The tails of a comet always point away from the Sun. Most comets travel a safe distance from the Sun itself. Comet Halley comes no closer than 89 million kilometers from the Sun, which is closer to the Sun than Earth is. However, some comets, called sun-grazers, crash straight into the Sun or get so close that they break up and vaporize. Impacts from comets played a major role in the evolution of the Earth, primarily during its early history billions of years ago. Some believe that they brought water and a variety of organic molecules to Earth.