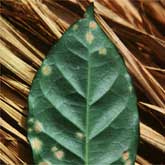 Did you know that a disease of coffee plantations made the British tea drinkers? In the 1700s Britain had many coffeehouses that served as popular social gathering places to discuss current events and conduct business. For example, the famous insurance company 'Lloyds of London' was started by patrons of Edward Lloyd's coffeehouse about 1774. These coffeehouses obtained their coffee from plantations in Ceylon (now known as Sri Lanka), the leading coffee exporter of the time. About 1870 a serious disease, coffee rust, struck these plantations and in 10 years had destroyed half of the coffee production. As a result of this disease former coffee plantations were replanted with more than a half-billion tea bushes.

A pound of tea yields 10 times as many cups of the brew as a pound of coffee, making tea much less expensive than coffee and allowing the lower classes to enjoy a stimulating beverage. So tea became a great leveler of British society.

Although rust-resistant coffee varieties have been developed, races of rust occur that overcome this resistance, and the disease continues to be a problem. Strict quarantines are enforced in coffee growing regions of the world, especially in Central America, in an attempt to prevent the establishment of rust in their coffee plantations.