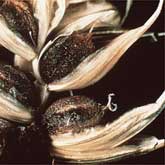 Did you know that gingerbread came about because of a smut disease of wheat?

Stinking smut is a disease that replaces the wheat grain with a black powder of spores that has a strong fishy odor. Flour ground from smut-contaminated wheat, although not poisonous, has a gray color and an unpleasant fishy flavor. Many years ago a baker in Europe had a supply of flour ground from smutted wheat and people would not buy bread made from this flour. Rather than discard this tainted flour and suffer a financial loss, the baker added molasses to the dough to mask the dark color and ginger to cover the fishy flavor. So, according to some authorities, gingerbread was created.

The smuts are a large group of plant diseases caused by a family of fungi related to the rust fungi (Basidiomycetes). Among the most important are the smuts attacking various cereal grains such as wheat, rice, and corn. The stinking smuts attacking wheat replace the grain with dark smut balls containing the fungus spores. These smuts are also called bunts, a name that comes from the charred, or burned, appearance of the kernels. The fish oil odor comes from a flammable chemical in the smut spores and explosions often occurred in threshing machines harvesting smutted wheat, as well as in storage bins where sparks from machinery ignited the spore masses.