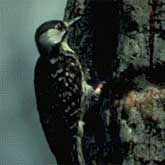 In the mid-l800s, naturalist John Audubon reported that the red-cockaded woodpecker was found abundantly in the pine forests of the southeastern United States. Historically, this woodpecker's range extended from Florida to New Jersey, as far west as Texas and Oklahoma, and inland to Missouri, Kentucky, and Tennessee. Today it is estimated that there are about 4,500 family units (groups) of red-cockaded woodpeckers, or 10,000 to 14,000 birds, living in clusters (groups of cavity trees) from Florida to Virginia and west to southeast Oklahoma and eastern Texas, representing about 1 percent of the woodpecker's original range. About the size of the common cardinal, the red-cockaded woodpecker is approximately 7 inches long (18 to 20 cm), with a wingspan of about 15 inches (35 to 38 cm). Its back is barred with black and white horizontal stripes.

The red-cockaded woodpecker feeds mainly on beetles, ants, roaches, caterpillars, wood-boring insects, and spiders. Rat snakes are a primary predator of red-cockaded woodpeckers. Agile tree climbers, rat snakes eat woodpecker eggs and nestlings. But the red-cockaded woodpecker has an effective means of defense. It chips small holes (called resin wells) in the bark of the cavity tree, above and below the cavity. From these wells, sap (resin) oozes down the trunk of the tree. When the snake comes in contact with the sap, the sap adheres to the scales on its underside. Even tiny amounts of resin inhibit the movement of the scales, preventing the snake from climbing higher. Red-cockaded woodpeckers spend a significant amount of time and energy each day maintaining the flow of the resin wells. If the tree should die, or the damage from maintaining the wells becomes so great that the sap stops flowing, the woodpeckers will eventually abandon the cavity tree.