A Tickle is All in the Timing 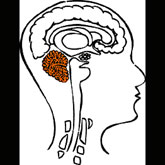 It's often been noted that no matter how hard you might try, you can't tickle yourself. Why not? Whether it's your finger or someone else's, a prod in the ribs is a prod in the ribs. Why should only one of two objectively identical stimuli evoke a tickle response? The answer lies in the fact that it's your brain that creates the sensations of a tickle, not your ribs. Every second of your waking life, your brain is making predictions about the consequences of your own movements, so that it knows what it has to react to and what it can ignore. As long as the actual incoming sensory information matches the anticipated sensory consequences of self-initiated movements, it's tuned out, or at least turned down.

Brain scanning technology allows us to see what's going on in the brain when that happens. It appears to be a part of the brain called the cerebellum, a brain stem structure generally involved in muscle coordination, that does the job of monitoring self-initiated movements and anticipating their consequences. What the cerebellum does when you try to tickle yourself is to suppress the activation of other brain regions that would otherwise create the tickle sensation. Those other brain regions, in and near the frontal lobes, are ones that underlie moment-to-moment emotional sensations, including the sense of pleasure that serves to reinforce behavior that your brain deems worth encouraging. So the success or failure of a tickle depends on a skill of distinguishing the consequences of your own decisions from unexpected events intitiated outside your brain. That's a skill that it's easy to take for granted, but it's crucial for a normal awareness of reality.

What if the routine consequences of self-willed movements always came as a shock? What if you couldn't tell the difference between your own ideas and the voice of a stranger inside your head? What if you imagined your thoughts and actions were controlled by an outside force? Confusions like that, if they last more than a split second, are called delusions and hallucinations, and they're symptoms of schizophrenia. From one perspective, this important ability can come down to a simple issue of timing. If your anticipation of the consequences of your actions is just a little off, your entire scaffolding of sanity might collapse. Be reassured, then, when an attempt at self-tickling goes nowhere. It means your brain's automatic system for making distinctions essential to your mental health is working well.