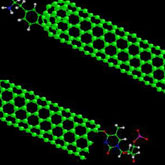 What's the smallest thing you can imagine? Can you think of something extremely tiny that is also extremely strong--many times stronger than steel--and very flexible? Give up? The answer is carbon nanotubes, and nanotubes are made with nanotechnology. Now imagine those microscopic bits of technology being used to create teeny tiny machines that can travel inside the human body to attack cancer cells, or be assembled into enormous structures to fly humans into space. If this sounds like science fiction, you're half right: nanotechnology hasn't yet been refined to create these inventions, but scientists believe that before long, it will be a reality.

To compare this to a building, current technology moves buildings from place to place to create new cities. Nanotechnology can move individual bricks in each building to change the shape and characteristics of the buildings. By moving bricks to create windows, corners, and slopes to the roof, a building can perform very differently from the original design. That's what nanotechnology does to atoms. As scientists are able to do this with greater accuracy and knowledge, we will be able to make products that are lighter, stronger, smarter, cheaper, cleaner, and more precise. By manipulating the way atoms behave to create lighter materials, for example, a car could weigh 50 kilograms (110 pounds).