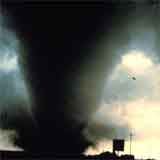 Tornadoes are perhaps one of the most terrifying manifestations of weather. Luckily for the rest of the world, they occur most frequently in the United States. A typical tornado season may see as many as 700 tornadoes. They are unpredictable, violent, and deadly: a rapidly spinning column of air with winds reportedly as high as 200 miles per hour (321.8 km/hr) or more.

Tornadoes are born when warm moist unstable air meets cold dry air. Sound familiar? That's right, the same process that births thunderstorms. But very few meetings between warm and cold air spawn tornadoes. Some additional elements come into play, not all of which are well understood.

One element that seems to play a role, is a process in which a thunderstorm begins to rotate around itself. A thunderstorm in this state is called a supercell. Supercells can be quite violent on their own, throwing off high winds, hail and torrential rains. On certain occasions, supercells will create the conditions necessary for a tornado, or even worse, a series of tornadoes. Another element that is often present is a strong updraft. Winds traveling rapidly upward create low pressure near the ground, which in turn, pulls more warm air behind it. Whatever the mechanism, once tornadoes form, only time will return them from where they came, but not before they've left a wake of destruction in their paths. Another fact - tornadoes in the northern hemisphere most often rotate counterclockwise, or cyclonically (hence our word cyclone).