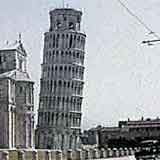 Most everyone is familiar with the famous Leaning Tower of Pisa. It's known not so much for its engineering, as for the fact that it hasn't fallen yet. From an engineering standpoint, it is a study in what not to do, although the architectural elements of the tower are truly striking.

The bell tower stands 184 feet tall and currently leans almost 17 feet (5.18 m) out of alignment. Construction began on the tower in the year 1173 and was completed about 175 years later. Notably, the original builders excavated a foundation too shallow to reach bedrock, yet began building in earnest. It became apparent during construction of the third story that the tower was leaning. The solution - to build successive floors taller on the other side. This had little effect and the tower continued its tilting. Scientists have determined that the ground beneath the tower is composed primarily of clay and sand. Due to the weight of the structure and its compaction of the subsoil, the tower first tilted to the North and then settled into its current lean to the South.

It is remarkable that the tower hasn't fallen. Scientists have cited several factors for that - the long period of construction allowed the ground to stabilize, while the building material was inherently elastic. Over the ensuing years, many attempts were made to correct or at least halt the tilting, including pouring cement or lead, on several occasions, into the foundation. Today's update - the tower continues to lean.