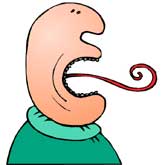 Even though we call it a 'tongue twister,' it isn't really your tongue that has a hard time saying 'sixth sick sheik's sixth sheep's sick.' It's not all that rare for people to make mispronunciations when their brain sends the wrong instructions to the tongue because it's anticipating speech sounds that are to come later in the speech stream. Classic cases: 'tee many martoonis' (too many martinis), 'it just shows to go' (it just goes to show), 'fickled pigs' (pickled figs). Everybody does this on the fly, at least occasionally, especially during moments of psychological stress.

That's a clue that the mix-up is in your brain, not your tongue. More evidence: Experiments show that people take longer to read through tongue twisters than other sentences of similar length and complexity even when they're reading silently - in other words, even when they're not using their tongue at all. (You can check these results by reading tongue twisters silently to yourself.) Also, a very recent brain imaging experiment shows that this kind of silent reading shows up as greater activity in a part of the brain handling aspects of language that have nothing directly to do with the instructions sent to the muscles of the vocal tract: it's a sound-processing brain region upstream of the articulatory area that seems to be working harder to handle the difficult sequence of sounds.

The tongue twister phenomenon is a universal of human language, and points to some interesting biological differences between the genders. From a young age, girls tend to outperform boys at oral articulation and other language skills, and girls are better at activities involving manual speed and coordination and fine motor skills. (Think of rhyming and hand-clapping games like 'Miss Mary Mack.') What these kinds of manual and verbal skills share is that they all require rapid-fire processing of elements that have to be ordered exactly right if the game is going to come off. That kind of sequential processing is usually viewed as a strength of the left hemisphere. Activities that involve large-scale spatial skills and large motor movements, such as visualizing and navigating a route that allows you to intercept and tackle a playmate, are more right-brain-dependent, and those are what the boys tend to be better at.