The Strange Spin of Uranus 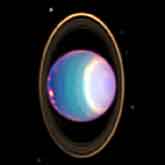 But imagine being on the planet Uranus. There you'd get really confused about north and south, because Uranus spins on its side. Its rotation is about 90 degrees off the vertical. This means that its polar axis points towards the horizon. But which axis? If it is spinning counterclockwise like Earth, we can easily fix one of the poles as the north pole. But most scientists think that it is actually spinning slightly less than 90 degrees. This would mean its rotation is retrograde, spinning clockwise. So actually we should be calling the south pole the north pole instead.

To make matters more interesting, Uranus' magnetic pole is not even close to its true pole. Scientists are split as to why Uranus rotates horizontally. A popular theory is that Uranus collided with a large planetary body in the early solar system that, in effect, knocked it on its side.