There's A Lot More To Vision Than Meets The Eye 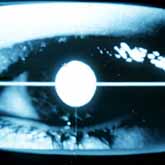 Have you ever heard of Anton's Syndrome? It's a bizarre medical disorder involving a dramatic mismatch between sensory input and conscious awareness. Why is the syndrome bizarre? Not because the patients who have it are blind, or even that they steadfastly deny that they're blind. Those are both true. But the really weird thing about it is that they're not lying. As they stumble over chairs, walk into walls, knock over glasses, and offer ridiculously implausible excuses for their clumsiness, they really are convinced that they can see perfectly well.

Anton's Syndrome, also known as 'denial of blindness,' is caused by damage to vision-processing networks at the rear of the brain, and it is rare. But you can think of it as an extreme form of a syndrome we all suffer from. Neuroscientists who study visual processing can offer lots of examples of ways that you're a lot more blind than you'd be willing to admit. Just like the Anton's Syndrome patients, you'd be wrong about your perceptive abilities. But you'd also be absolutely convinced that you were right. It has nothing to do with your eyes. It's your brain that's at fault. Your brain is designed to notice sudden changes. If you were looking at a passenger jet taxiing on a runway and one of its engines fell off, you'd realize it. But now picture this.

You're sitting in front of a video screen with an image of the jet on it. The screen goes blank for an instant. The image reappears, but now the plane is missing one of its engines. You'd still notice the change, right? Wrong. The pause between images removes the brain-alerting movement cue, and even if a scientist in a white coat tells you to look for a difference in the picture, you'd have the darnedest time finding it. In effect, you don't really see the jet engine unless an abrupt change or movement draws your attention to it. You just can't escape the conclusion that most of the time you're missing an awful lot, and you don't even realize it. (If you think you're more perceptive than the subjects of those experiments, here are a couple Web sites where vision researchers Ron Rensink and Dan Simons, at the University of British Columbia and the University of Illinois respectively, have posted demonstrations you can use to test yourself. Good luck!)