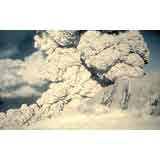 A volcano, during a violent eruption, blasts massive amounts of heated rock fragments, hot gas and ash out vents and collapsing domes. This sudden outpouring of superheated material reaches temperatures of up to 1500 degrees F (815.5 C) during a volcanic explosion and sometimes results in the rapid movement of molten lava called a pyroclastic flow. This flow creates a maelstrom of debris, rushing away from the volcano at up to 150 miles per hour (241.3 km/hr), igniting, melting and destroying everything in its path.

Many pyroclastic flows are made up of two different types of material. Basal flow is composed of denser rock fragments and moves close to the ground, often following the contour of the land. The second type of material in a pyroclastic flow is the lighter, yet still thick, rapidly moving cloud of ash and debris that roils and churns above the basal flow, often spewing ash over a great distance downwind from the actual flow.

The word pyroclastic comes from two Greek words: pyro which means fire, and klastos which means broken, a very apt name for this violent event that has destroyed property, burned forests and killed tens of thousands of people over recorded history.