What's In Your Water? 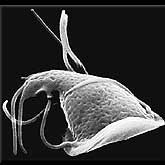 The United States has strict policies on water treatment systems and sewage drainage, but what about other countries? 'Don't drink the water' is the first thing most people hear when they tell their friends they're going to Mexico. So what exactly is in the water and how does it get there? Do Mexicans get sick from their water too?

As water runs through watersheds, it picks up microorganisms, such as E.coli, Cryptosporidium, and Giardia from cow waste and Salmonella from chicken waste. These organisms, when taken in by humans, can cause flu-like symptoms such as fever, vomiting, and diarrhea. Most groundwater is considered to be safe for drinking since it runs through layers of dirt which filter out harmful microorganisms. In the United States, any raw human sewage is required to be treated. Virtually all water has some microorganisms in it, harmful or harmless and in varying amounts. We are used to the water where we live and most people don't become ill from drinking the water they have drunk all their life. So why do we get sick from drinking Mexico's water?

The main reason people from the United States become ill from drinking Mexico's water is because we are not used to the amount or kinds of microorganisms present in their water. The people who live in Mexico are almost immune to the microbes present in their drinking water. So, why are their water supplies so polluted? Their water treatment facilities are not advanced; therefore, large investments are required to improve the quality of Mexico's water.